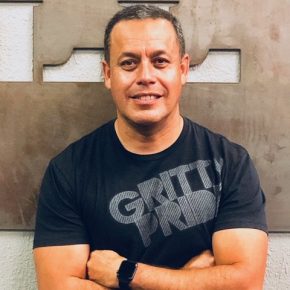 Danny Lopez:  Danny’s entire life is and has been about being active. Growing up in Veracruz all he wanted to do is play outside almost to he point of being dragged back into the house. Moved to Mesa, Arizona when he was 16 years old.  He played soccer growing up and played competitive racquetball and coached for several years before he got married.  He also enjoys playing wallyball, dirt bike trail riding, hunting, wake surfing, and of course CrossFit.

Danny got involved in Crossfit about 7 years ago and has been a member of The Cell Gym family ever since.  His desire to learn the methodology, lead him to pursue his CF-L1 trainer certificate, and started coaching shortly after that.

His family enjoys Crossfit as well, and join him as often as they can.  Danny is continually pushing himself to improve, and he likes helping others to do the same.  Encouragement,  motivation, and the desire to see everyone succeed are a big part of what he believes in as well as The Cell Gym community.

He has been married to his wife, Alva, for 18 years and they have 4 children ages 16 years old to 5 years old.