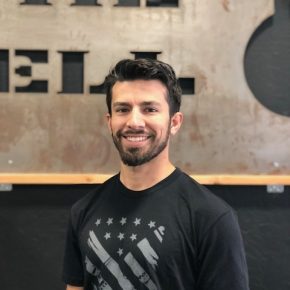 Sport and fitness were always a part of my life growing up. Always playing new sports, even if it was for one season, but found a home in cross country and track. I found CrossFit through a Groupon one summer while home from college and was immediately hooked. After graduating from Northern Arizona University in 2016 I came to The Cell and found a welcoming community where I began shadowing and eventually coaching. After some time, I reapplied to graduate school at NAU where I obtained a master’s degree in biological science, where I studied fish morphology and physiology. During my time in Flagstaff I was brought onto the coaching staff at CrossFit Flagstaff and reignited my desire to coach and dive deeper into understanding of movement and mechanics. I attended seminars and actively seeked opportunities to coach various age groups, athletic backgrounds, and abilities. I’ve found a passion in helping people move correctly and in a way that reduces risk of injury. I personally believe it’s not necessarily about how much you lift, but more so the effort put into moving properly, in order to sustain longevity.